Ron Atkinson's Manchester United visited Highfield Road in September 1984 on their way to winning their first 11 league games. The fixture was over by half-time as Brian Kilcline saw red for two fouls on Norman Whiteside just six games into his Sky Blues' career. Atkinson's 'Red Devils' won 3-0 which would have delighted their hordes of Coventry-based fans. His team comprised Gordon Strachan, Bryan Robson, Paul McGrath and Mark Hughes but their fine form faded after Christmas, a Terry Gibson strike giving City three points in the return fixture at Old Trafford. United finished the season in fourth place as Everton won the title by 13 points from Liverpool. Five days after the 3-0 defeat, the man who would score the last ever professional goal at the stadium was born, his name was Andrew Whing.

A product of the club’s youth policy, Birmingham-born, Aston Villa season ticket holder Whing made his debut, aged 18, in February 2003 as Burnley won 1-0 at Highfield Road. Until his departure in 2007 the popular right-back appeared 119 times and found the back of the net twice. His move to Brighton, initially on loan, turned into a permanent move before subsequent transfers to Leyton Orient and now Oxford United. Following his departure the injury-prone David McNamee, out of position Isaac Osbourne, out of his depth Adam Virgo, club captain Stephen Wright and four-time loanee Richard Duffy all filled the troublesome number two shirt. The emphatic form on the right flank of the inspirational Richard Keogh would eventually solve the problem. 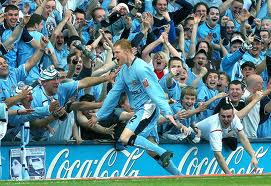 Whing is forever remembered at City for his goal and celebration in the 6-2 win against Derby in April 2005 (see clip below and forward to 6:05 minutes). Replacing Claus Jorgensen with the Sky Blues leading 5-2, his first touch of the ball sent a half-volley into the roof of Lee Camp's net to seal an unforgettable day as we bid farewell to the stadium we should never have left. With Oxford on the verge of a play-off spot in League Two 'Whingy' may well be playing in League One next season. He has not played at the Ricoh since his departure but, when he does, he'll be guaranteed a warm ovation from the City faithful for his efforts in sky blue.

Fast forward seven years and the usually excellent Lee Camp's error of judgement for Forest against Bristol City plunged City back into the relegation zone they departed just seven days ago. City added to this with an inept performance at Ashton Gate. 2300 supporters in the ground and many others worldwide were let down badly by a team unable to register a shot on target in a game that mattered. The no-show from so many of our 'stars' was hugely disappointing.The game was built up for weeks, we sold out the away end each spending around £50 to watch our team and then they fail to turn up. Nothing less than a win at Burnley will suffice and then it's look over your shoulder time to ensure Birmingham and Marlon King defeat the red side of Bristol to take us into the Millwall game.
Posted by Unknown at Tuesday, April 10, 2012